Sex and the City Movie

Sex and the City Sneak Peek.....
On Fifth Ave. across from the Metropolitan Museum of Art, TV's favorite dating columnist, Carrie Bradshaw, played by Sarah Jessica Parker, took her first strut in promotional shots for the film.
Parker's on-screen alter ego has always been known for her flashy fashion, and yesterday was no exception. The blond star was decked out in a bright green frock and 4-inch heels that one Web site described as "scaffolding-like."
The pièce de résistance was a handbag that looked like a miniature Eiffel Tower - a clever nod to the last episode of the show, in which Carrie's ex, Mr. Big, showed up in Paris to rescue her from a relationship gone wrong.
Yesterday, as eagle-eyed upper East Siders watched, Mr. Big, played by Chris Noth, swooped in for a passionate lip-lock that suggests his turbulent relationship with Carrie is still alive and kicking.
In the afternoon, the crew, clad in "Sex and the City: The Movie" sweatshirts, shifted the scene to 63rd St. and Madison Ave. for the first shot of the movie - though not necessarily the first scene.

The location was the interior of the foyer at the New York Academy of Sciences, which had been cleverly disguised with a new awning - suggesting that it could be used in the film as the foyer of Mr. Big's apartment building.
A peek into one of the trailers on the scene revealed a glittering wardrobe of funky clothes for Parker, who arrived at 3:45 p.m. to start filming.
Since the end of the series in 2004, whispers of a movie version of the glam New York City sex comedy have had fans crossing their fingers.
In July, New Line and HBO finally announced their partnership on the movie to be helmed by director/producer Michael Patrick King, with backing from John Melfi, series creator Darren Star and Parker. In the same breath, the studio confirmed the four central actresses: Parker, Cynthia Nixon as Miranda Hobbes, Kristin Davis as Charlotte York and Kim Cattrall as Samantha Jones. 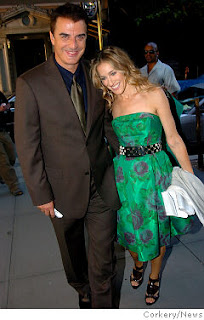 Soon after, Noth signed on, and last week it was reported that Oscar winner Jennifer Hudson was in negotiations to play Carrie's new assistant.
Monday night, the cast and crew - minus Nixon, who some said was home with her 4-year-old son - gathered at Butter on Lafayette St. for a kickoff party.
With filming officially begun, script secrets are flying faster than Manolo Blahniks on a Carrie shopping spree - but we'll only hint at what we know.
A source got a peek at the script and reports not everything is hunky-dory in Miranda's marriage when things cool off in the bedroom between her and Steve, played by David Eigenberg.

Also, we've discovered that Charlotte's quest to get pregnant picks up speed.
And if you think Mr. Big's turn as a knight in shining armor didn't make sense with his unpredictable appearances on the show, there's more frustration to come from this continental commitment-phobe.
The film will shoot in NYC, on L.A.'s Rodeo Drive, in Malibu and in Mexico - as well as at the offices of Vogue, where Candice Bergen will return to her role as the mag's icy editrix. Dream Girls Oscar-Winner Ms. Jennifer Hudson will play Carrie's assistant. 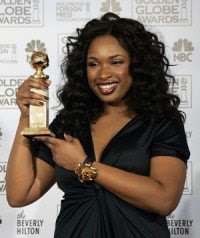 Get Ready For A Sexy Date Movie In The City.......
If only HBO could have delivered a Sopranos Finale we could actually see.
Email Post
Labels: Celebrity News

Treschicstyle said…
This comment has been removed by the author.
October 8, 2007 at 9:21 PM