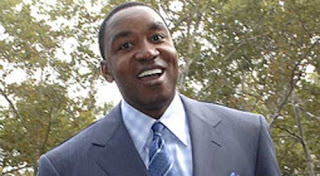 Four days after New York Knicks Coach Isiah Thomas was held liable for sexual harassment, the Rev. Al Sharpton said that Thomas must apologize if he felt there was a different standard between black and white men in using a derogatory term toward black women.
In a video of Thomas’s deposition, he was seen saying it was less offensive for a black man to call a black woman a “bitch” than it was for a white man.
Quote: It would be less offensive for a black man rather than a white man to use such language toward a black woman.
“Not as much and I am sorry to say I do make a distinction,” said Thomas when asked if he thought it was offensive for a black man to call a black woman a “bitch”. “A white male calling a black female a ‘bitch’ is highly offensive to me,” he said.
Sharpton said Thomas told him by telephone that crucial context had been omitted when part of his deposition was seen in court.
The jury found against Thomas, the Garden and its chairman, James L. Dolan, and ordered the Garden and Dolan to pay $11.6 million in damages for subjecting a former team executive, Anucha Browne Sanders, to a hostile work environment and for improperly firing her.
Sharpton said that if the tape was not incorrectly spliced, Thomas had to apologize. If Thomas does not, Sharpton said that his organization, the National Action Network, would picket Knicks games.
“I told Mr. Thomas that our position had nothing to do with the person using the language,” Sharpton . “We cannot have double standards for sexism and racism.”
Thomas’s camp sent to Sharpton by e-mail a portion of his trial testimony in which he said that “it is never acceptable” in any way to use the word.
Sharpton said Thomas told him yesterday that he would not apologize for “something I didn’t say.” Sharpton said he told him that “if there was a misunderstanding or if it was misconstrued, we can talk about that.”
At the Knicks’ camp in Charleston, S.C., Thomas told reporters that he and his wife, Lynn, gave Sharpton “the facts and now that he has the facts, he can make a much more informed decision.” Thomas said he told Sharpton that the excerpt was “spliced in a video that made it say something else.”
Kevin Mintzer, a lawyer for Browne Sanders, said that before the trial, Thomas’s lawyers — upon the judge’s ruling — could have designated excerpts of the deposition to counter those chosen by Browne Sanders’s team.
“But they didn’t,” Mintzer said. “And you didn’t hear any objections to what was ultimately played in court because there weren’t any.”
Kathleen Bogas, one of Thomas’s lawyers, would not comment.
Barry Watkins, a spokesman for the Garden, said the context left out of the deposition was not sent to Sharpton or used in court because “Thomas was much clearer on the stand than he was in the deposition.”

Is he saying black on black b*tch calling is okay? This is about to go into our “blame it on hip hop” files. Isiah needs to shut up, apologize and go sit down somewhere.
White, Black, Rich, Poor,....it is never okay to refer to women as "b*tches"-period.
Question: Should Isiah Thomas apologize or is Rev. Sharpton taking this out of context?
Email Post
Labels: News