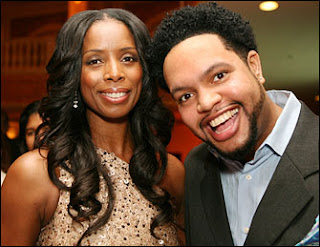 Tasha Smith is no newcomer to Hollywood. The 36-year-old Camden, N.J., native has been a working talent in Tinseltown since she was 18 years old, first as a stand-up comic and then as an actress. "I was a comedy whore for about seven or eight years,"

With more than a decade of acting experience under her belt, Smith has finally become one of Hollywood's ones to watch, with impressive turns in recent films like 'ATL,' 'Daddy's Little Girls' and the upcoming 'Why Did I Get Married.' During our candid conversation, Smith talked about her drug addiction, fear of dogs, Tyler Perry, being a former atheist, among other things.

Meeting Tyler Perry: "Tyra Banks and Tyler Perry were very good friends and she would always tell him, 'You gotta meet my best friend … She's so talented.' He had never seen 'The Corner' or 'Boston Common' or 'ATL.' It was like he was only familiar with the Gabrielle Unions and the Vivica Foxes of our industry. I met him at the 'Madea's Family Reunion' premiere. He invited me to come with Tyra so that we could meet. Then, another day he came to my acting studio. At that time, he told me that he felt like I could make the voice of this character that he was working on come alive. When I read the character and saw that it was a crazy drug dealer, I was like, 'Why do you think I can make her come alive? She's crazy and she's a drug dealer.' He just felt that from my technique and how I felt about the craft and what my process was, that it could be a great fit.
"On once being an atheist: "I was depressed and high on cocaine and feeling like I wanted to kill myself. I felt like I need to make a change. I remember I challenged God. I said if you're real, then I need you to do this, this and this. I told a friend … when I called myself challenging God, God was really drawing me in. He was saying it was time for this Tasha to come out of this dark place and that's what his grace ended up doing to my life. During this time, I wasn't working, working, but I was doing my comedy. I think that the anger, the rejection and the disappointment of Christianity in people that I saw who seemed to be very religious kind of drove me away. I don't even know looking back if it was something that I really believed. I hoped that there was a God, but I think that my disappointment caused me to say it can't be 'cause if you folks who claim to know Jesus are acting like that, it can't be true.
"Being Christian in Hollywood": To your own self you must be true. If you're strong enough in the foundation of who you are, all you can do is be who you are in the environment that you're in. You shouldn't change based on your environment. It's just who I am. I'm not trying to do this or that. My name is Tasha, I'm from Camden, N.J. and I'm a Christian. What's the big deal? You have some people who are from certain places who are Muslim or Buddhists and they are who they are. Why can't I just be who I am? I'm not trying to hurt nobody; I'm just trying to be at peace."

'Why Did I Get Married' opens Oct. 12. Also look for Smith in syndicated radio host Russ Parr's sophomore film, 'Something Like a Business,' opposite Kevin Hart, Kym Whitley, David Allen Grier and Chris Spencer.