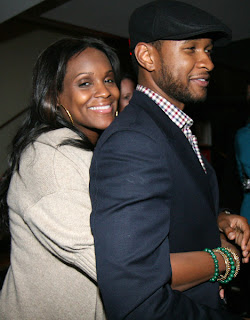 Looks as if Tameka has still got that gator grip on poor little Usher. The singer who was supposed to drop an album next month has revealed that there might not be an album at all, at least for a while because of “issues in his personal life”.
Via NY Page Six:
“Usher only listens to Tameka now, and she wants all Usher’s focus to be on her and the baby.” The couple, who wed in August, are expecting later this year. Bailing on the album may not have been a wise decision on his part, however, especially because other lucrative ventures - like the launch of his new fragrances - were scheduled to coincide with the new disc. “The album had been in the works for over a year, but he put it on the back burner when Tameka got pregnant . . . ...now it looks like it may never happen.”
Tameka, let the man work. He went from being a bachelor to being married to a older woman with children and aother on the way. He’s gonna need all the money he can get especially if he doesn't have an iron clad pre-nup)
We wish the couple well on marraige and their little one.....
Email Post
Labels: Celebrity News