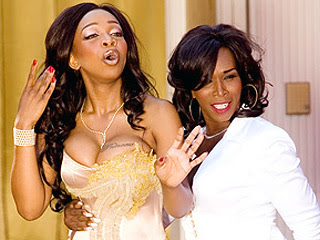 Somebody please tell me this is an awful joke....

Yikes!"
Yeah, that was basically our reaction to everything that occurred on the season premiere of I Love New York 2 on VH1. So many things fascinate us about this show that we really can't turn away. Sure, it's trashy, but we allow ourselves to indulge every now and again.
First of all, how offensive is New York's mother?! If she made fun of "Midget Mac" one more time.... We have a feeling that boy will be around for at least a couple more episodes.
Like last year's guys, this year's cast is, um........................ interesting.
You've got "Cheesy", who is basically "Boston", but not as likable.
We have "It" who makes his Addams Family namesake seem normal. We could go on and on, but we'll predict right now that it'll be Buddha and Pretty in the end. Or maybe Chance and New York will finally end up together!
If there is any justice in reality television, they will.

Miss New York & Mama too, we cannot judge you...make that money any way you can! (even if you have to disgrace yourselves at the same time)

FYI...They have really stepped their wig game up!
(somebody please offer them a promotional deal to model hair or something, so they can leave the damn reality shows alone.)
Email Post
Labels: Television