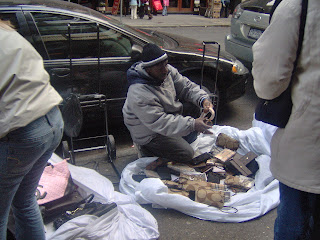 Even with the seizure of one of the largest-ever counterfeit smuggling rings of designer apparel, shoes and accessories ever in New York this week. Fakes still manage to make their way to just about every corner or street in New York City.

I'm not too sure what it is so exciting about purchasing goods off the streets that send tourist into a frenzy. First of all, your forced to shop off the ground where bags are displayed on dirty sheets or canvas cloths. Once the vendors unveil their goods, customers swarm like cattle. I watched as deals were made with Gucci, Prada and Chanel. Is it that people in smaller cities cannot easily detcet a fake so they head home rockin' that Chanel tote like it's the real thing....... 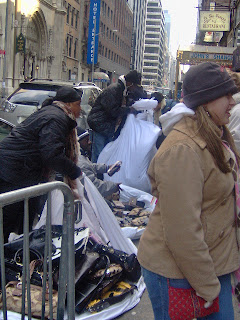 One happy shopper just scored a fake coach wristlet for $25. These were the only photos I could get, once they saw me they became nervous and a little angry at me for exposing them.......
Will this "fake phenomenon" ever stop!!!!!
Email Post
Labels: Fashion News