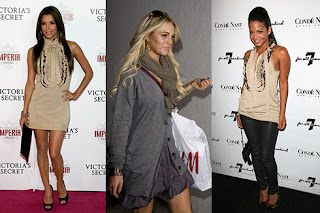 Courtesy Second City Style
From Eva Longoria to Lindsay Lohan and Christina Milian, it seems every magazine we open shows another celebrity wearing H&M. Straight from the L.A.Times comes an article detailing how the shaky economy, savvier buyers and deep department store discounts are forcing many of once thriving boutiques to screech to a halt or close altogether.

Since late 2005 to earlier this year, fashion boutiques popped up in L.A. at a dizzying pace. This new crop of boutiques was the antithesis of mass-market, offering a tightly edited selection of merchandise that represented the owners' particularly L.A. spin on the trends of the day.
But times, they are a changing. Iconology on La Brea Avenue and Filly on West 3rd Street -- went out of business last month. A third, Lily Savitch on La Brea Avenue, is expected to fold in the next few weeks, according to owner Lily Savitch.
The closings and slowdowns have cast a shadow on L.A.'s reputation as an up-and-coming fashion capital, a place whose style profile and spending power have been validated over the last few years by the opening of boutiques from some of the fashion industry's most celebrated brands, including Martin Margiela, Oscar de la Renta and Helmut Lang.

So what's afflicting L.A.'s once-booming boutiques?
When consumers start tightening their purse strings, high-end retail suffers first. Often those choices take consumers to department stores that are able to discount merchandise more deeply and for longer periods of time. Most boutiques, on the other hand, have to move the bulk of their inventory for any given season at full price to be able to afford the next season's collections. Figure in rent and overhead, and two consecutive seasons of horrible sales can -- and did -- equal ruin.

Years ago, it wouldn't have mattered how deeply department stores discounted their merchandise. They didn't carry the edgier designers, then the sole domain of stores such as Ross' and Maxfield. But in an effort to chase the boutique business, department stores including Nordstrom and Macy's have, in recent years, developed new divisions for young, cutting-edge brands.
"If people don't support our boutiques, the city is going to become a big department store," Tracey Ross said. "It's going to be all H&M discount all over the place."
Very similar to Eva Longoria, Lindsay Lohan and Christina Milian pictured above in H&M...
Email Post
Labels: Fashion News