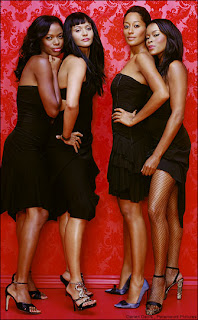 My favorite fashionistas and "Girlfriends" that take center stage in my living room each and every week will end the series without any fanfare, celebrations or even a season finale..........

On Monday, Feb 11th, The CW Network announced its plans to cancel the series without fulfilling its remaining obligation to shoot nine episodes. A girlfriend debuted in September 2000 and has been a favorite of 20-35 year old women across the country.

This CW Network has blamed this unexpected turn of events on the recent Writer's Guild Strike and has left many fans like me annoyed and outraged.