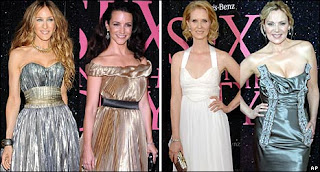 The wait is just about over........
Sex and the City will debut in theaters and our fashion fantasies will be renewed in just two short days!
Last night the phenomenal cast, crew, devoted celebrity & non-celebrity fans and paparazzi descended in New York City for the star studded NY Premiere at Radio City Music Hall. Miss Tres Chic Syle missed an invite to this monumental event (thanks to the unprofessional folks over at New Line). 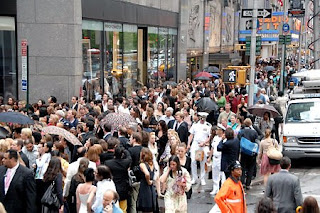 This is what it looked like last night at the premiere. Many waited in line for up to 4 hours.

Celeb blogger Perez Hilton even speaks about how 2,000 people never made it in the premiere despite being ticket holders (Yikes). 2,000 fashionistas on the streets of New York with nowhere to go due to a ticket snafu..... The New York Daily News reports an angry crowd ensuing on the corner of Sixth Avenue and 51st St. last night surging against police barricades, cursing and stomping their Manolo Blahniks. (and it was raining!!!!)
Anyhoo despite the theatrics and my personal gripes with New Line Cinema, I had to post some photos of the ladies on the Pink Carpet. 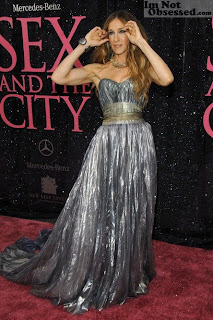 Sarah Jessica Parker hit the Pink Carpet in her metallic slate grey ensemble by Nina Ricci complemented with dazzling Fred Leighton jewels. Designers were lining up months ago to dress this fashionista (some even willing to pay her). 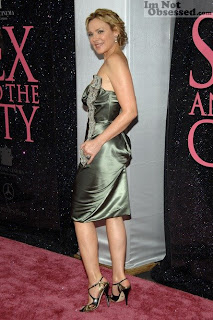 Kim Cattrall channeled her alter ego Samantha in a snazzy Vivienne Westwood cocktail dress and some pumps that would even make Kristopher Dukes jealous. 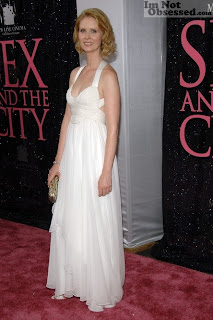 What the hell was Cynthia Nixon thinking?? This Lil' Bo Peep frock was my least favorite of the night. The sweeping length Narciso Rodriguez gown and un-coiffed mane really distracts the overall look. Reminds me of a David's Bridal designer knock-off...Did you peep her white sandals peeking underneath the gown? 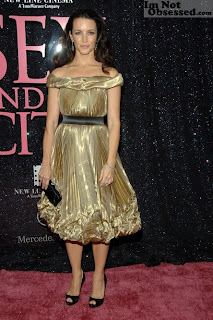 Kristin Davis really missed the mark on this one. Her Manolo Blahnik black peep-toe pumps are very simple and understated. A strappy stiletto works well on a Red Carpet. Her Donna Karan gold lame tu-tu look confuses me not to mention the strain it's putting on my eyes.

These ladies were supposed to bring it at the US Premiere. I've seen this cast look better on their Talk Show rounds the last few weeks. These looks are not my favorites and did not meet my expectations at all. I've been raving about these fashionistas like forever and a day and they have the audacity to disappoint when it really counts..... 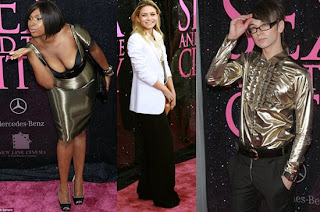 Jennifer Hudson manages to give us more cleavage than we needed to see, while Mary Kate opted for over sized trousers and a boxy jacket (Is that supposed to be a statement). Our favorite Project Runway contestant ever Christian Siriano glammed it up in his rendition of Elvis in the City......
Email Post
Labels: Celebrity Style Movies Red Carpet