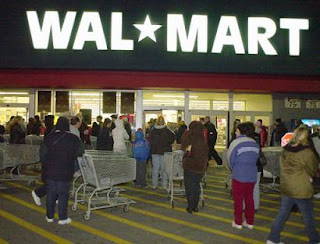 Greetings Fashionistas, I hope your holiday was a fabulous one......
As many headed out this morning in search of Black Friday bargains, a young man from Valley Stream, Long Island tragically lost in his life in an early morning stampede at Walmart.
I've headed to that Valley Stream Walmart on many Black Friday's in the past and I can tell you it is always hectic..... I've heard of people even camping out at 11pm Thanksgiving to be at the front of the line. The mere fact that it is the only Walmart in the NYC Metro area, means that everyone from the 5 boroughs seek out that coveted location.
Though Tres Chic Style is committed to bringing you the best in fashion news and style advice, I personally felt the need to write about this horrific event. The AP reports, the worker was killed in the crush Friday after a throng of shoppers eager for post-Thanksgiving bargains burst through the doors at a suburban Wal-Mart. "He was bum-rushed by 200 people," co-worker Jimmy Overby, 43, told the Daily News. "They took the doors off the hinges. He was trampled and killed in front of me.
Each and every year, retailers utilize this "unofficial" shopping holiday to lure shoppers into a frenzy while advertising coveted electronics at drastic reductions.
Have we gone that far as shopper's that safety is no longer a concern? Are we actually that desperate to score a discounted plasma screen?
I'll be skipping the malls this holiday season and headed to my favorite online retailers and maybe you should too......
Tres Chic Style extends our sincerest condolences to his family at this difficult time....
Email Post
Labels: Holiday News Shopping