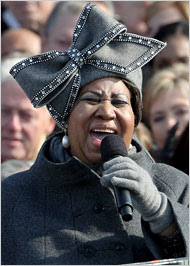 Queen of Soul Aretha Franklin has received more attention for her choice of the hat she wore to Barack Obama's inauguration than she has for her rendition of "My Country Tis' of Thee"....
We've read the articles, saw photo shopped images of other's donning the design and even watched Ellen Degeneres spoof the Queen's choice on her daytime show. 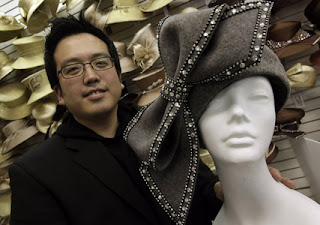 According to the LA Times, thousands of phone calls have poured in from all over the world to Luke Song, owner of Mr. Song Millinery in Detroit who created the much talked about design. "Aretha Franklin has been a customer of the store for 20 of the store’s 25 years", said Song, whose father used to own the shop. The heather-gray wool felt design featured a prominent bow lined with Swarovski rhinestones. Custom-designed and hand-molded over two days by Song himself, the hat cost upward of $500.

As many in the millinery industry (or African-American churches) know, a good milliner never duplicates an intricate design. So ladies........you won't be purchasing an exact replica of the Queen's design from Mr. Song, but he welcomes you to try on a similar satin-ribbon version for a mere $179. 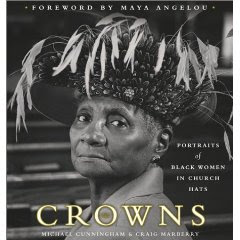 It's utterly appalling to me that at this day in age, stylist and writers are mesmerized by a traditional look that has been worn in African American Baptist & Christian churches for centuries. African-American church women have been referred to as "Hat Diva's" and even inspired a best-seller, Crowns: Portraits of Black Women in Church Hats.

"Crowns" takes you through a journey of celebration & women donning their "church hats". The forward by Dr. Maya Angelou reads:

And then, she leaves home and joins the company of her mothers and aunties and sisters and nieces and daughters at church whose actions have been identical to hers that morning. They too had waited longingly for the gift of a Sunday morning.

Get the Look: As a milliner and fashionista I've seen Song's design duplicated a hundred times over. The design is actually a simple "pillbox" used for the foundation, some molding (also known as blocking) to ensure the perfect shape and about 2 or 3 yards of felt to form an over sized bow.

Do you posess "Hattitude" or are you longing to wear a show-stopping design like Aretha, email us for tips, places to shop and millinery advice......
Email Post
Labels: Accessories Fashion