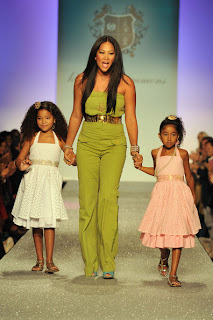 As previously reported, Kimora Lees Simmons will be unveiling her Baby Phat Fall '09 collection this Tuesday. This year Kimora's giving her fans an insiders look into what goes on backstage at one of her shows. Baby Phat will be doing a live Twitter feed from backstage at the Baby Phat show Tuesday, February 17, 2009 from 7:00 pm - 9:00 pm.
Fashionista's will be able to log on to www.twitter.com/babyphat and get a "backstage pass" to find out what goes on behind the scenes at one of the most fabulous shows of the year!
Fashion Week Day 4.....
The glamorous creations of Jill Stuart & Tracey Reese sashayed down the runways at Bryant Park today. Making for quite the star-studded front row, Kim Kardashian and Reggie Bush teamed up with the Hilton sisters at the Tracy Reese show. 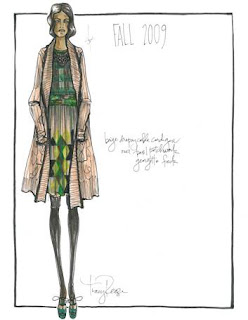 Tracy Reese's runway was filled with her signature, mostly easy-to-wear frocks and some excellent pants as well.
Models adorned black thigh highs, some knitted caps and a few donned the of-the-moment nerdy eyeglasses. This show was dedicated to Tracey's mom, Patricia, who passed away last week. Her front row seat sat empty with a bouquet of flowers resting on it.
Looking forward to.......Season four Project Runway winner Christian Siriano will show in Bryant Park on Thursday marking his first time with his own collection in the tents.
Email Post
Labels: Events Fashion Fashion News Fashion Shows Shopping