Sex and the City Sequel Confirmed... 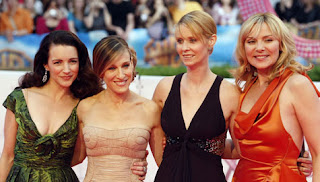 Sex and the City 2 will hit theaters in 2010 according to confirmed reports. The stars of the series, Sarah Jessica Parker, Kim Cattrall, Kristin Davis and Cynthia Nixon have all signed on for the sequel. There's no start date yet for the sequel but they don't want to keep us waiting..... Insiders are stating shooting will begin as early as this summer.

Quick recap in case you were hiding under a rock when the movie premiered.....
When we last left Carrie, she married Mr. Big even after he left her humiliated at the altar. Samantha and her young beau Smith Jared split, while Miranda and Steve patched things up after he cheated on her. Charlotte and Harry not only adopted cute baby girl Lilly, but Charlotte gave birth to a second daughter.

So what do you think should happen next? Stay tuned.....
Email Post
Labels: Fashion News Movies