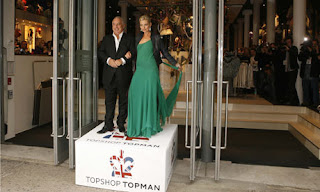 The Swedish delivered us H&M and now the Brits are finally here in the Big Apple. Super Model and Topshop owner SirPhillip Green (pictured above) opened the 40,000 square feet , 4 story shopping paradise at 11am today in New York City. The highly anticipated opening has the city and tourists in a major tizzy. Throngs of fashionistas and topshop devotees packed Broadway for a glimpse of the uber British retailer. 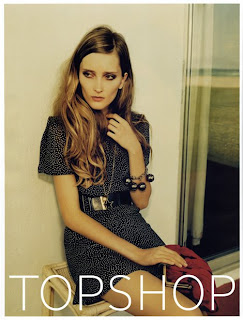 Brushing aside economic misery, Topshop declared its intention to take on the US main street with an explosion of music, noise and celebrity at its twice delayed opening in Manhattan. After a countdown led by television presenter June Sarpong, an opaque ­curtain lifted from the 25,000 sq ft SoHo superstore with a blast of red, white and blue tickertape.
Familiar in Britain since it opened as a concession inside a Sheffield department store in 1964, Topshop has a presence in 31 countries, across Europe, Asia and Latin America. But it has never before tackled the US, widely reckoned to be the toughest market in the world.

I'll trek into the city next week when the hysteria has quieted down and see what all the fuss is about....Stay Tuned!
Email Post
Labels: Fashion Fashion News Shopping