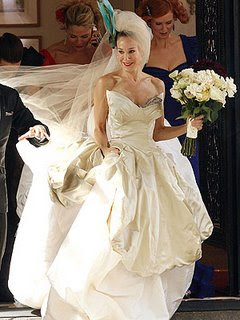 Vivienne Westwood & Wedding......not necessarily two words you'd envision together! The iconic designer is synonymous with her signature artistic vision and classic interpretation of style.
In the first Sex and the City film Carrie was sent a bevy of beautiful designs (still remember them all). The dress designed by Vivienne Westwood obviously stood out amongst others and became her choice for her wedding. Sex and the City has definitely helped raised the popularity and visibility of this dress. So much that Madame Westwood has decided to take a whirl at her own Bridal line. 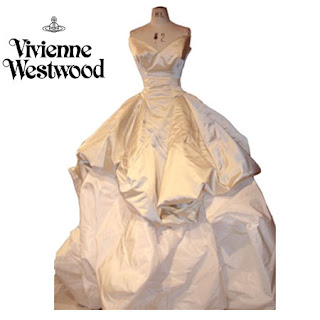 According to published reports, the gown donned by Carrie (SJP) in The Sex and the City film sold out in a matter of hours after being available to consumers. Online shopping maven, Net-A-Porter was wiped clean of the Westwood creation the same day it was available to their customers, carrying a $9,875 price tag. Uh, What recession???
And yes SATC fashionistas, the sequels has been confirmed...let's just hope Mr. Big's contract negotiations prevails....Tisk!
Email Post
Labels: Fashion Shopping Wedding