It is with profound sadness we mourn the death of fashion magnate and icon, Eunice W. Johnson. Mrs. Johnson, wife of publishing giant John H. Johnson (Ebony/Jet Magazine) was the creator, producer and director of The Ebony Fashion Fair. She made her transition on January 3, 2010 at her home in Chicago, Illinois.

As a little girl growing up in Brooklyn, I always remember an Ebony Magazine on the coffee table. See, Ebony was our Time/Life Magazine. We looked to that magazine for news, success stories within our communities and for me... The Fashion!

I have always been intrigued with the Johnson Publication story. From their early beginnings in Chicago to the publishing empire it is today. Eunice W. Johnson, was not just the wife of John. Many credited her for being his driving force and ultimately "the wind beneath his wings". 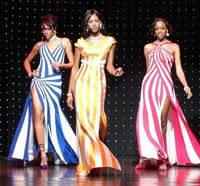 To date, Ebony Fashion Fair, the world’s largest traveling fashion show, which annually encompasses a nearly 180-city tour of the United States, Canada and the Caribbean, has raised more than $55 million for various charities.