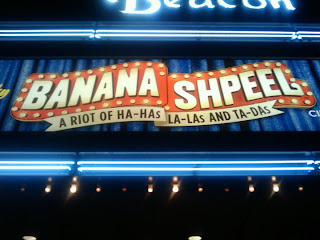 This Friday the fabulous team at Tres Chic Style were treated to a phenomenal performance of  Cirque du Soliel's latest production, Banana Shpeel. Having heard mixed reviews, I was uber excited to see the show, not to mention my affection for all things Cirque.


Three minutes into the production, the audience received a warm & schmeltastic greeting by Marty Schmelky (played by Broadway veteran actor, Danny Rutiglia) who also happens to deliver a show within a show. Banana Shpeel is the latest show from producer extraordinaire Marty Schmelky and features a colorful array of slapstick comedy, eclectic dance and unique acrobatic acts. The larger-than-life personality presents the diverse talent the show's creator has gathered from around the world, as zany characters spread chaos throughout the theater.

The international cast is comprised of 38 performers, Mr. Schmelky, two slapstick sidekicks and his wacky assistant Margaret. The ensemble takes us through the search for Schmelky's newest assistant for his upcoming show and even has a little audience participation. The show offers incredible acrobatic performances, hat jugglers and contortionists. They are playfully beguiling and electrify the theater with every number.

My favorite element of the show was the vivacious brother-sister tap duo Joseph and Josette Wiggan. These two kept the audience engaged with their energetic numbers and infectious enthusiasm. I must admit, they literally "danced" their way into my heart....


Ticket Information
Banana Shpeel tickets range from $45 to $110, with a limited number of premium seats available.

To purchase tickets, go to www.schmelkyproductions.com or www.ticketmaster.com or call 1-866-858-0008.


Tres Chic Style Behind The Scenes...... 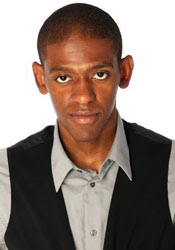 In addition to experiencing the Vaudeville style marvel of Mr. Schmelky & cast, Tres Chic Style was afforded the opportunity to interview the jewel behind the energetic dance routines, choreographer Jared Grimes. We caught up with Jared a few moments before the show and realized from that moment on we were definitely in for a treat!


During my interview with Mr. Grimes it was obvious that he was soft-spoken ad passionate about his craft, but I was in awe of how humble this ingenious individual is. In addition to his work in Banana Shpeel, Jared has performed alongside Wynton Marsalis for President Obama during The Kennedy Center Honors, danced alongside legends such as, Gregory Hines and Mariah Carey and even formed the group Tah-Dah (tap, acting, dance and hip-hop).

Jared poignantly expressed his enthusiasm for infusing a modern style of dance into Vaudeville theater. As a baby of the hip-hop generation, I must admit I was a bit anxious to see the two genres culminate on stage. In an early scene performers paid a vibrant homage to tap. There was even a moment where a dancer appeared on stage with fancy rhythms and resembled the King of Pop, Michael Jackson. In my opinion, Jared Grimes was the perfect choice for choreographer and did a phenomenal job of keeping the audience's attention with  colorful, charismatic dance interludes.

Tiffany said…
I love Cirque, I see their shows whenever they come to town and I am always amazed.