Tres Chic Style Travels Back in Time...The Dish on Walking With Dinosaurs! 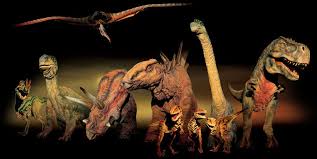 Tres Chic Style was treated to a delightful Opening Night Performance last night of Walking With Dinosaurs courtesy of the fabulous team at Madison Square Garden. I must admit the commercials/advertisements had me excited and the kid in me has always held an affection for these prehistoric reptiles.

About the Show:
Walking With Dinosaurs is a brilliant production based on the award-winning BBC Television Series. The show originated in Australia and has been captivating audiences since 2007. The show proved to be such a sensation, a North American tour was quickly conceived. In three short years the show's two companies have played to over 4.4 million people worldwide and generated over $210 million dollars in overall ticket sales. The show consists of 17 dinosaurs. 10 large (weighs 1,6 tons) , 5 suit dinosaurs(Pretty Big too) and 2 baby puppets. 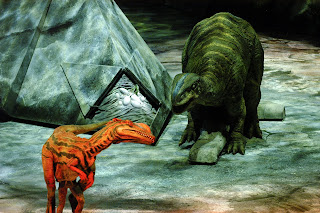 Our center stage seats proved to be some of the best in the house. The Garden's floor was transformed into a 76 million year old habitat. Guided by Huxley, the resident Paleontologist; curious audience members (myself included) was taken on a journey through the world where dinosaurs once ruled. 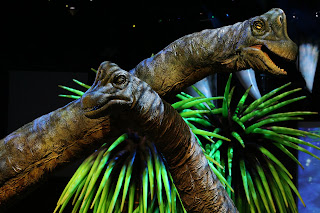 An adult brachiosaurus and his offspring share a special moment in the show...
I must admit, these life size marvels ran the court a lil' bit faster than my beloved New York Knicks.... *Tee-Hee*
BBC brought the huge reptiles to life and did accomplished a dynamic feat. The crowd favorite, the revered Tyrannosaurus Rex exploded onto the arena floor to thunderous applause. As T-Rex roared onto the crowd of each corner of the Garden, the thousands of adults and children were amazed as she made a very realistic curtain call across the arena floor.

In 90 minutes we traveled millions of years and were treated to an educational travelogue and ultimately Walked With Dinosaurs......

For Additional Information and Tickets:
www.dinosaurlive.com
Tickets are on sale now until July 25th
Phone: 866.858.0008
Online: www.thegarden.com/dinos
Or head on down to the Madison Square Garden Box Office
Email Post
Labels: Events Lifestyle