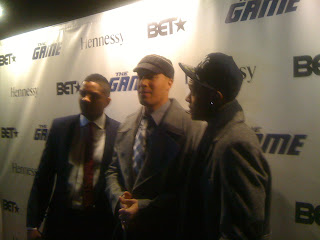 Last night Tres Chic Style was invited to the uber-exclusive New York Premiere of BET's newest addition.... The Game!
We have loved the "San Diego Sabers" & "The Sunbeams" since their legendary debut on the CW 11.

BET chose the luxurious and posh TriBeCa Grand Hotel and libations were sponsored by Hennessy.

The Dish: In 60 minutes we picked up where the creative minds of Salim & Mara Brock Akil left us 2 years ago... Melanie & Derwin are living their fairytale dream in "Saber Land", while the trials of Derwin's toddler(DJ)with Janae continues to be a challenge in Melanie's picture perfect world.

Tasha Mack (Wendy Raquel Robinson) is still the trash talking "Mom-Ager" with a fierce new client and an interesting love life.. Fast forward to Kelly Pitts (Brittany Daniel) and you have a snarky character on Basketball Wives... In a word.. Drama!

Malik Wright has reprised his role of the over-zealous and sometimes arrogant Malik Wright. He's still a force to be reckoned with but has one issue.... Derwin Davis stealing his "shine"!

Lot's of cameos and surprise along the way and halfway through you realize what a gem this show has become. It's relevant, witty and a breathe of fresh air on television. I won't spoil the first episode for you lovelies, but will tell you one thing.... You Don't Want to Miss It!