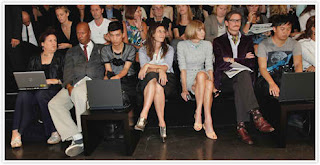 It's Day Three of Mercedes Benz NYFW Fall 2011 and the hysteria is just settling in... We've hit some amazing shows and snagged some great footage too! We settled in at BCBG Max Azria to a wondrous collection of muted hues and voluminous layers. The show gave us a glimpse into the finds of fall with luxurious sprinkles of crimson and splashes of jewel tones. 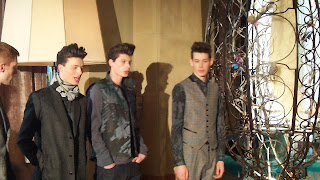 Copperwheat Fall 2011 Collection "Urban Warrior"
Then proceeded downtown to the snazzy SoHo Grand Hotel to peek in on the Copperwheat Presentation an and chatted a bit with lead Make Up Artist Victor Henao (for Beautyblender)  backstage. This season the artist abandoned the usual concealer under the eyes and delivered a fresh "undone yet chic look". 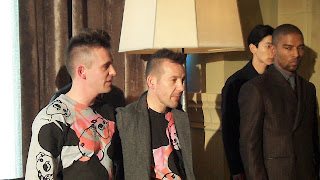 Copperwheat Finale, Tailor/Designer Lee Copperwheat & Print/Designer Ben Copperwheat
The collection infused a military inspired style with a penchant of classic yet modern. In previous seasons The Copperwheat Collection were heavily influenced by New York City. This season was similar with noted street style influence and the cousins signature attention to out of the box prints and graphics.
Sashaying downtown to Alisha Trimble Fall 2011 Collection.... 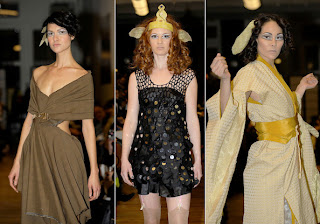