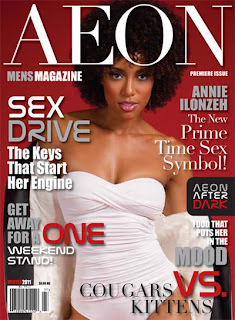 This holiday season in lieu of that usual bottle of cologne asa  lil'extra gift why not deliver a gift to your beau you both can curl up under the fire and both enjoy... Indulge him with AEON!

Last night I had the pleasure of attending the AEON Mens Magazine launch in NYC. In attendance were the super sweet men of Aeon magazine. I say super sweet because each of the creators were the most welcoming hosts with members of the media. As the inaugural publications were handed out, attendees examined the specimen with meticulous care. I was immediately impressed with the quality of the layout, design and overall quality of the coveted read.

As I chatted with my husband, I instantly realized we may both be reading Aeon.. Together! Although it's a mens magazine, the creators at Aeon may notice their female counterparts as excited (if not more) than their  target audience comprised of males 25-60. After all, we as women are always curious regarding what's on the minds of our spouses.. and the topic of sex can seem to open up the flood gates of conversation between couples or friends.

The well chosen topics and editor's notes provided me with an amazing introduction into the world of Aeon. Aeon being derived from the greek word "Forever" was founded by a group of friends intent on engaging the male species in useful and relevant conversation sans the typical men's glossy gravitas.

While the magazine notably strives to become a guide to sex and lifestyle, the Aeon man will receive information pertaining to travel, business, style and health related topics.  Operations Director, Gerry Dort even hinted that a future culinary column may be added in addition to a few surprises along the way.

With an initial quarterly roll out, Aeon is expected to be published monthly in 2012. Aeon Mens Magazine hits news stands  in the U.S. and The U.K on November 21 and is poised to take the print and digital media industry by storm.