Oscar Style: Viola Davis Is More Than Just Her Hair 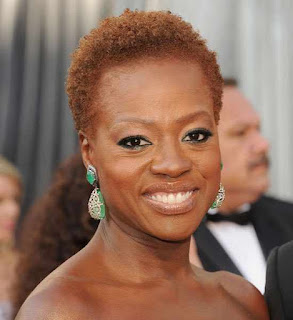 As an African American woman in her thirties I sat on the phone with my best girlfriend and chatted about the Oscar Red Carpet Arrivals. We applauded our favorite looks and chimed in our least faves as well. When Viola Davis sashayed onto the carpet clad in an emerald Vera Wang and bronzed skin we took notice to her dress, jewels and really hadn’t commented on her hair. It was short, cute and just an everyday occurrence in our minds.
In less than 5 minutes Twitter was a buzz with tweets that Viola “left the wig at home and opted for her natural “fro” “. I was a bit perplexed because I’ve seen women black and white don wigs, weaves and falls in all my thirty years. When Resse Witherspoon arrived on the carpet at last year’s Oscars sporting extensions (poorly mismatched to her natural hair at that) not a comment was made.
The fact that America’s eyes were glued to Viola’s choice of hairstyle rather than her phenomenal talent, tenacity and plethora of awards this season alone baffles me completely. The choice to forgo a hair extension, wig or weave is a personal decision and not something that needs to be explained. If she opted for a wig, would that make her any less “natural” in the minds of African Americans. The debate of natural versus relaxed hair garners much controversy in the black community.
In 2012 women of all ethnicities have the distinct privilege to adorn bountiful tresses, ringlets or opt for a cropped cut likened to Michelle Williams or Viola Davis without such criticism or backlash. In what could be a monumental night for Hollywood as two African American actresses could go home with an Oscar, critics are determined to take the spotlight off of what  the night is poised to celebrate.... Real Talent!
Email Post
Labels: Celebrity News Celebrity Style Hair Movies Television