In Chic Awards Show News: Kerry Washington In Marchesa Hits a Glam Slam at The 2013 Emmys 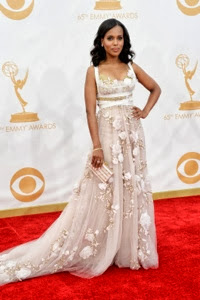 America's Best Dressed Woman and "Scandal" starlet Kerry Washington delivered a dash of glam at the 2013 Emmy Awards. While tongues are wagging about Kerry's baby bump, our eyes were glued to the fashion... We'll dish about the baby later! ~Tee-Hee~ 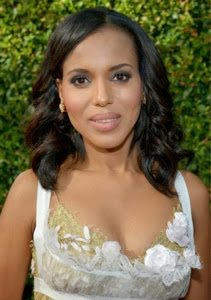 The "Scandal" actress, who was nominated for best actress in a drama, stepped out in a (Spring 2014) Marchesa gown and looked stunning. The nude hued frock was embellished with a hint of gold lace and adorned with flower appliqués. According to US Today, Once Kerry spotted the dress on the runway at NYFW her first response was "Send It To Me".

Seems like when Olivia Pope speaks.... Designers seem to listen!