Liberace Returns To Vegas.... The Cosmopolitan Hosts "Lee" For a Fashion Finale! 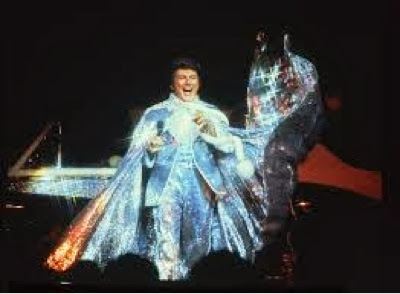 There's so much that intrigues me about the rich and vibrant history of Las Vegas and Wladziu Valentino Liberace is truly one of them. As a lover of all things fabulous, Librace intrigued me as a child. He would step on the stage with a regal prescence and shut the show down! I never had the opportunity to see him live, but have watched countless hours of footage as a consellation.
2013 certainly seems to be the year of "Liberace".... HBO's Behind The Candleabra swept this year's Emmy's and delivered a unique glimpse into the dazzling life of Liberace. While the Las Vegas Hotel & Casino (Formerly The International and The Las Vegas Hilton) served as home to the famed stage show, The luxurious Cosmopolitan has snuck in and reclaimed the glory for a bit. Liberace devotees (like me) around the globe can snag a glimpse into the life of Las Vegas’s most extravagant showman. The Liberace Foundation for the Performing and Creative Arts, which oversaw the former Liberace museum (Returning to Diwntown Las Vegas in 2014), presents "Too Much of a Good Thing Is Wonderful: Liberace and the Art of Costume" opening November 25 at the Cosmopolitan of Las Vegas. 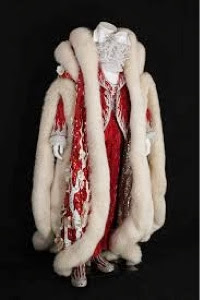 Christmas cape (above): In 1980, Liberace wore this gabardine and white fox cape for his Christmas appearances at the Las Vegas Hilton and then again at Radio City Music Hall in 1985. The cape demonstrates the skill of Anna Nateece, a Greek-born master furrier who was a staple on the American fashion scene for more than four decades. It features an appliqued, multi-limbed tree and is lined entirely with silver sequins.

Too Much of a Good Thing Is Wonderful: Liberace and the Art of Costume will open Nov. 25 at 3 p.m. Hours are Monday through Sunday from 3 p.m. to 10 p.m. For more information, please call 702-698-7640 or visitcosmopolitanlasvegas.com.
Email Post
Labels: Vegas