In Chic Tech News: Applebee's Wants You To Interact With Tablets..... NOT Your Server! 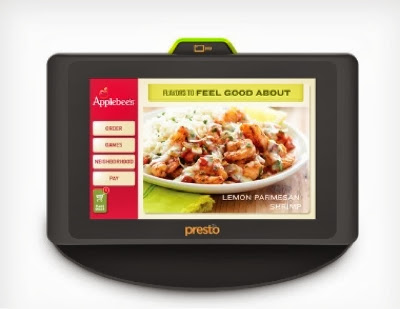 Do you love going out for dinner but hate the human interaction it always requires? Applebee's apparently knows the feeling: One of  the world's most relaxed restaurant chains is adding tablets to its tables and bar areas to let you order your food and pay the check without having to track down your server. There will even be games and social media interaction for times when you're eating alone, or with someone who makes you wish you were eating alone.
The new plan involves the purchase of 100,000 tablets from food service tablet maker Presto, which will include a standard credit card reader as well as NFC to link up to mobile wallet apps. The tablets will be rolling out to 1,800 Applebee's locations in the US by the end of 2014. The company also says it plans to add other features like streaming music, video, and even tools that will let you share what you're eating with Facebook buddies.
Email Post
Labels: Lifestyle tech