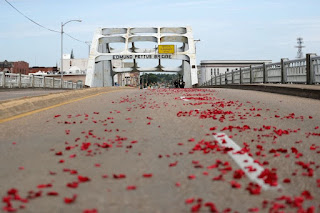 On Sunday July 26th hundreds lined the entry to The Edmund Pettus Bridge to bid farewell to Rep. John Lewis. The processional slated to begin at 10am would deliver a glimpse into John Lewis' final crossing across the very bridge where he was beaten and ultimately almost lost his life.
His life and valiant spirit as he crusaded for justice resonated with people from all walks of life as seen by the individuals braving the Sunday morning heat and traveling as far as Michigan and close as Nashville. They were clad in t-shirts and hats bearing various quotes from the fallen Congressman, sat in lawn chairs, donned face masks and carried umbrellas in an effort to block the Alabama sun.
Small groups would spontaneously erupt in solemn but joyous chants of the church hymnal, "This Little Light Of Mine" and "We Shall Overcome".
Atlanta's iconic funeral director and purveyor of "Home Going" style, Willie Watkins organized a send off befitting of a King. Two gorgeous bouquets of white roses and lillies lined the entrance of the bridge while the brothers of the African American Greek Organization Kappa Alpha Psi took turns sprinkling red roses along the entire bridge in preparation of John Lewis who was a distinguished member of Phi Beta Sigma Fraternity, Inc.
As the family and staff of the congressman arrived in luxury motor coaches the crowd began to waive and eagerly await the horse drawn carriage that would carry the remains of Rep. Lewis.
As the flag draped coffin prepared to make the final trek across the bridge it was interesting to see the Alabama state troopers tip their hats in a sign of respect. Just 55 years earlier troopers would chase black individuals and the congressman for marching for voting rights.
Screams of "Thank You John Lewis" and "Good Trouble", (his trademark term he often referenced when speaking of making a difference in the world).
Being at the Edmund Pettus Bridge today delievered a bevy of emotions. Rep. John Lewis life stood as a beacon of hope. He held a stead fast consciousness and an overwhelming will to stand for justice. Standing today to bid farewell left me thinking about "Bloody Sunday", the fateful day that John Lewis thought he may very well lose his life on the Edmund Pettus Bridge was now welcoming him with open arms. In all that he endured including receiving a fractured skull to being beaten by law enforcement and jailed more than 40 times for fighting for fair and equal civil rights, his spirit was never tainted nor his desire to be free. Today our beloved John Lewis is FREE and we honor his life and legacy.
Email Post