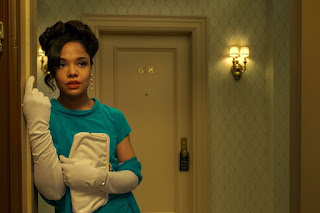 Writer-director Eugene Ashe's Sylvie's Love gave the world an intricate look into Black stories and a majority-Black cast representation in the cinematic romance of Old Hollywood. Released on Amazon Prime on December 23rd, with the Harlem Renaissance as the backdrop, Sylvie (Tessa Thompson) dreams of becoming a television producer while embarking on a star-crossed romance with saxophonist Robert (Nnamdi Asomugha).

The film touches on the Civil Rights movement and sexism in the home and workplace while detailing the classic story of a young woman finding herself, her goals, and true love with glamour and STYLE. 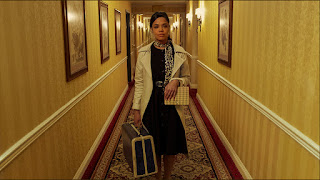 We adore a film with amazing vintage fashion and costume designer Phoenix Mellow—whose résumé includes period pieces Hollywood and Mad Men delivered in a huge way. While tapping the creators and purveyors of fashion at The House of Chanel, Mellow re-created 50's - 60's fashion with a reported 50 costume changes for Tessa. 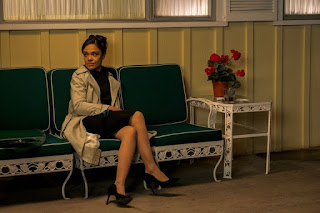 The film was a welcome reminder of the history of black women in fashion. From Pat Cleveland (who's mother Lady Bird Cleveland was an actual fashion inspiration for the film) to Eunice Johnson's Ebony Fashion Fair... Black women have long been a force in the fashion industry. It's certainly time that Hollywood take notice.
Email Post
Labels: faahion Film Lifestyle Style File