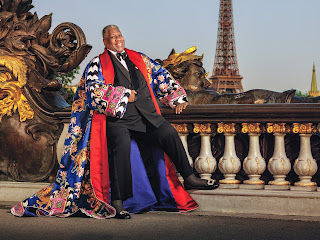 This week delivered a bevy of emotions and memories all somehow connected to the "Godfather Of Fashion", Andre Leon Talley. After hearing the news I frantically perused my 30,000+ Google Photos in search of my last encounter with the "Godfather".
While spending some time on the vineyard this Summer, I made a special trip to Providence, Rhode Island to peek in on the art installation of Mr. Talley himself at The Graduate Hotel. Providence, the home of Brown University and where Andre Leon Talley received his Masters Of Arts in French Literature in 1972.
I have been intrigued with his larger than life presence since the days of Ebony Fashion Fair. From his humble beginnings in North Carolina to his time at HBCU, North Carolina Central to the halls of Vogue I was all the way into Andre.
Many will remember him for his contributions to the fashion landscape, will refer to him as a legend or even as I saw someone in my part-time un-fashionable home of Chattanooga, TN refer to him as the "Black Man With The Robe" in a Facebook post.
The iconic Kaftans worn by the "Godfather" became his iconic garment of choice adorned in his latter years of life. "ALT" as he was affectionately called and a clear tell of the monogramming on various pieces of his Louis Vuitton luggage and even seen in the first Sex And The City movie. "ALT" wasn't just a purveyor of fashion, Andre IS fashion. From the early days donning Italian suits and furs to make you blush at Andy Warhol's Interview Magazine to stopping & stealing the entire show at The Met Gala year after year.
And then there was NYFW.....
Watching "ALT" perched atop the stairs at Lincoln Center, being whisked away to a waiting car or entering a show was always the highlight of my NYFW. Though I was never afforded the opportunity to chat or be introduced it was the approving glance... million dollar smile and signature nod that greeted me on at least three occasions.
Many say Andre Leon Talley had a way of making you feel seen and loved. From holding space for other emerging Black designers to pointing out the lack of diversity on runways and showrooms, "ALT" was a true pioneer in the industry.
I am grateful for his life, what he meant to my career in fashion and even those tiny moments at NYFW when I felt seen.
Thank You Sir Andre Leon Talley....
Email Post
Labels: Fashion Fashion News NYFW. Tres Chic Style Television