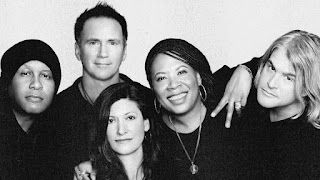 It was 1992 and all I can remember was being a sophomore in high school, getting sassy with my parents, rocking huge door knocker earrings, a Dominican doobie wrap and eagerly awaiting a new weekly episode of MTV's Real World New York. It was EVERYTHING !
Seven strangers picked to live in a Prince St. loft and have their entire lives filmed for the world to see. It was the greatest social experiment and revolutionized reality television as we know it. There were so many firsts in that show.
From Heather B. pursuing her dreams of a rap career and reminding us all that her dope rhymes were going to get here ahead - and that she would not be on anybody's stage rocking tight clothing & booty shorts.
Then there was Kevin Powell who unapologetically showed us the realities of white fragility when he was framed as the angry black man for basically stating truthful and much needed realities regarding race in America.
The first installation of Real World was way ahead of it's time. 29 years later, not much has changed in terms of race, however more magnified as the result of social media. While I was ecstatic to see the cast and see what they've been up to, I was a little disappointed to see the entire six episodes dominated by the selfish and at times childish behavior of one "Becky"....
Ah, yes... The resurgence of the privileged white woman strikes again. Becky's presence in "Homecoming " was just as nauseating as it was in 1992. Aside from her refusal to learn or grow in any way since the show's original airing, Becky chooses to blame other's for her overwhelming racist behavior. Her decision to depart the house weighed heavy on the entire series and left us all reminded of the dismissive attitudes that white people posses when they are confronted about their racially insensitive behaviors.
As a Black woman living in the South I can't tell you how many times a day I am met with micro & macro aggressions. The curiosity about my owning several businesses, to why I reside in a particular area, drive a Mercedes or am clad in a full length mink on chilly days. The sh*t is exhausting to say the least. Women like Becky who recklessly waive their white privilege and then insert the usual "But I work with Black dancers", pisses me the F*ck off.
And on the last episode, we watched Heather B. basically state that she wanted no parts of the "Becky" situation, when asked of her thoughts by Julie, Heather lamented "She didn't have time like that".
While the Jersey City native is still my fave on the series, I cringed as I watched her remove herself from the equation as if white people's racist behaviors against one Black person doesn't affect us all.
Unlike Heather, I have the time....
Time to no longer turn a blind eye to the racists fuckery that exhausts Black people everywhere.
We are TIRED.
Email Post
Labels: Black Women race Reality Television Television