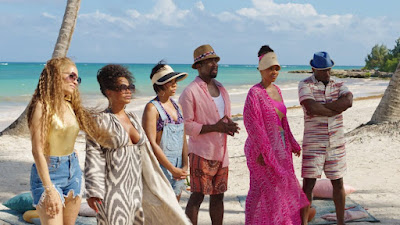 The holiday season just got a lil' sweeter....

Based upon the wildly successful film franchise written and directed by Malcolm D. Lee, the series catches up with all the real-time happenings of Harper, Robyn, Lance, Jordan, Quentin, Shelby, Murch and Candace. We have watched these college besties reunite for weddings, a wild and crazy episode on a balcony, a show stopping baby arrival and a funeral that had us all in tears (Mia we miss ya' girl).

According to Regina Hall (Candace), originally the last chapters were to be told on the big screen and it was immediately discovered it was just too much to sum up in two hours. The series will deliver four episodes filmed in New York, New Jersey and the Dominican Republic. In the teaser we learn Harper's original book (Yeah, the one that sparked all the chaos and him dangling off that roof) Unfinished Business will be turned into a film.

We are sooooo ready for this one! Peek in on the teaser below, drop in the comments and share your favorite scene, characters or watch party ideas.